One of the cheapest and easiest ways to measure ketones is to use ketone test strips, e.g. Ketostix.
Ketone test strips use a chemical reaction to measure acetoacetate (see below), usually in urine, though the same method can be used for blood.
(Not to be confused with the blood strips used at home for beta-hydroxybutyrate.)
However, acetoacetate test strips are of limited usefulness.
For one thing, urine concentrations are affected by dilution, which means that they are affected by how much you drink.
But the problem is deeper than that.
Acetoacetate is only one of the three ketone bodies (see below).
Initially, when you start a ketogenic diet, acetoacetate will make up about half of the circulating ketones [1],
but when you are keto-adapted, it makes up only about 20% of the ketone bodies in circulation (see below).
Morover, the sensitivity of the strips is a little lower than optimal for our purposes.
They register negative unless the concentration is quite high.
So, it is not uncommon for a keto-adapted person to measure negative for acetoacetate. 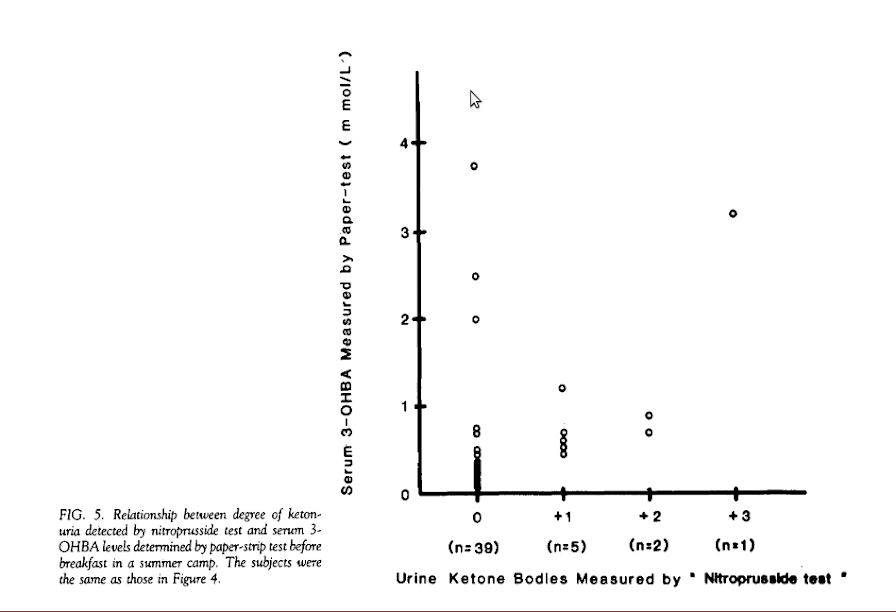 Most of the cases of high beta-hydroxybutyrate in this study were not also positive for urine acetoacetate. 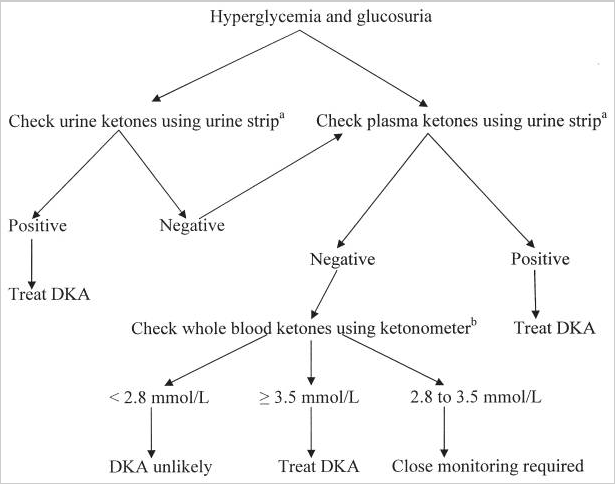 This flowchart shows that it is clinically accepted that even with very high beta-hydroxybutyrate levels, acetoacetate in urine and blood can be negative.
The reason acetoacetate is bothered with at all is that it is relatively cheap and easy to measure.

Ketone test strips are a cheap and easy way to confirm ketosis when you have very high levels, such as during keto-adaptation.
However, we would expect the false negative rate to be high for keto-adapted people, and for infants, (who are normally in consistent but mild ketosis while exclusively breastfed).
So although it can be a good tool when you are starting a ketogenic diet, it is not necessarily reliable as you progress.
A negative acetoacetate measure does not imply that you are not in ketosis.
If you are troubleshooting, and need more accurate measurements, we strongly recommend a blood ketone meter for beta-hydroxybutyrate.
However, be aware that the strips themselves are very expensive.
A new breath acetone meter is now on the market.
It costs about $100, but it doesn’t require any strips, so you pay only once.
Unfortunately, like the acetoacetate strips, the measure is only semi-quantitative, and appears to have a relatively high minimum threshold for showing positive.
We also don’t know how well acetone correlates to beta-hydroxybutyrate, or to therapeutic results.
Nonetheless, it is a promising technology, and it requires no pinpricks or pants down.
We’d love to hear from you if you’ve given it a try.

19 Replies to “Keto-adapted, but no ketones?”